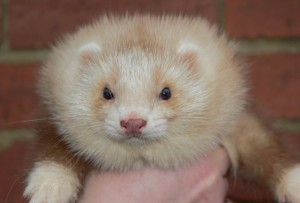 The angora ferret came about when a Swedish breeder found a mutation in his ferrets that were producing longer hair on the back end of their bodies. The Swedish breeder then sold his stock to a fur farm in Norway who worked on producing the ferret we today know as an angora.

The angora isn’t to be confused with the long haired ferret, part angora, half angora or semi angora. The angora has notable traits which are normally obvious compared to the others. The angora usually has an extra fold in the nose which is sometimes extremely slight or very obvious and usually a tuft of fur outside, inside or covering the nose itself.  Also, the angora has a lack of undercoat. The undercoat, or underfur, in mammals is a short soft fur lying beneath the longer and coarser guard hairs. The fur on an angora ferret is the same length and normally spans from 2 to 5 inches.

Below is a little write up I did for a lovely Canadian lady who asked me to do so.

The Angora Ferret by Candy Johnson

Angora ferrets have gone a long way since they originally started and sadly, many people are still misinformed. In the beginning they were bred for fur farms so health was last on the list of priorities, just as it is for most mill-bred ferrets in America. Most angora ferrets in America come from a well-known ‘back yard breeder’ where again, you have a breeder who doesn’t give a crap about health.

The angora has been improved upon by many breeders in Europe and the lines have been made far healthier than those of the American mill-bred ferrets. There are now many angora lines going back 12 or more generations. I help run Frisky Business Ferretry in England where we breed healthy angoras and all of our pedigrees are available to view by the public. We have added EU and healthy standard working lines to the angora line as well. The full angora jill normally doesn’t produce enough good quality milk to raise her young. For this reason we DO NOT use full angora jills at all to breed with, although I have heard of some full angora females who are now able to nurse their own young. The angoras also do not have a cleft palate. They have a cleft on both sides of their nose. This is normally a small extra fold with a tuft of fur. With some careful mating by experienced breeders, the clefts can be so slight that they can be easily missed or can be totally normal without fur or cleft.

Angoras are prone to the same problems as standard ferrets. Lymphoma, adrenal disease, and insulinoma are all too common in ferrets but in my years of having ferrets and running a ferret rescue, I have only had a handful of standard ferrets with those problems; problems which can be minimized by better breeding and the right start in life, late neutering/spaying (or implant), a raw diet and proper lighting. I have not seen any of these problems with the angora ferrets we have. I helped run a ferret rescue that ran for almost 10 years so I have experienced plenty of heartache in my time. I also had never once laid eyes on a ferret with Waardenburg syndrome. Waardy kids are uncommon over here in the UK, perhaps because we don’t really have mill-bred ferrets? Although we do have good and bad breeders but that is the same with any animal.

The breeding of any animal is always a work in progress and good breeders are always trying to better the lines, diet and health. What you don’t want is an early neutered/spayed angora which could develop associated problems later in life.

If wanting to breed, you want to make sure the male isn’t cryptorchid or monorchid (undescended or missing testes) and that the tail isn’t short and stumpy. Make sure also that the ferret isn’t deaf. All these can be signs of bad breeding and bad genetics. Also make sure your lines do not have a high inbreeding coefficient. You want to keep this as low as possible, especially with the gene pool being so small.

When looking for an angora ferret, find a reputable breeder and make sure the breeder is happy for you to view the parents and the kits if you are able to do so. You also want to know the kits have had the best start in life with a mainly raw meat diet starting at 3 weeks of age. Ask to see the pedigree of the kit and don’t be afraid to ask any questions you might have.

A good breeder will inform you the best they can and supply you with photos, videos and updates a few times a week so you are able to be a part of the growing process with your kit. This is all knowledge I have learned along the way and my own opinions. I am not an expert, nor do I claim to be. I just want people to know there are good breeders out there doing their best to improve the lines and have done an excellent job at it so far.