From time to time, we may have adult angora males available to breed or go into a pet home as we will be retiring our breeders at an early age. We usually retire the boys at 2- 3 years of age so if you are interested in any of our retirees for your ferretry or a pet home, let us know. Remember, they are our pets, not just our breeders. So they are well handled with great temperaments.

The boys, as we call them, are all very gentle BIG (we like em big!) boys and are a real pleasure to have. They all reside with Candy who adores her smelly hobs. Ha ha! So let me introduce you to “The Boys”. If you want to see a bigger version of the photos, just click on them. 🙂

This is Ghost. He is our very long awaited lilac angora hob. He has a nice stout body structure as well as the flatter face and blockier head that we like to see in our lines. He is a 2015 bred from Royal Angora Ferretry and we are excited he has joined our breeding program. He produced wonderful kits in 2016/2017 and some even inherited his tongue that seems to have a mind of its own since it is normally poking out. Ghost is our most loving boy. He will lay in your arms for ages and just groom you. We have never came across a more laid back fella than him. He does love to play though and one of his tricks is that he likes to roll on his back and stare at you until you give him tummy tickles. His coat is amazing and the longest angora coat we have seen. Click here for more photos of Ghost and to view his pedigree. 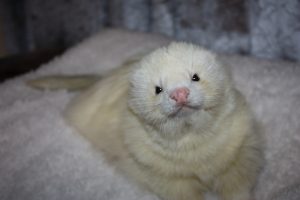 This ruby eyed beauty is Chalet Doré Mohican aka Mohi. We imported him from France in 2016 to join our ferretry. He was exactly what we were wanting and were so pleased when we were able to reserve him. He is a huge lad. The biggest of the bunch. His personality is so cute. He can be the cheeky boy of the bunch and when he gets told off, he comes to you and wants a cuddle, pretending to feel sorry for himself. I just don’t think he can help being naughty sometimes. Other than that, his nature is wonderful. He has never once bitten or even attempted to. We can’t wait to see his kits this year. Click here for more photos of Mohi and to view his pedigree. 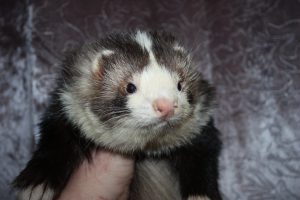 This is Frisky Business Ferretry’s Leviathan whom was born in our ferretry in 2017. He is a big huge lump of pure silliness. His whole world revolves around bouncing around like a loon. Even during photoshoots which makes it ridiculously hard to get a decent photo of him. He is a chocolate milk mouth blaze semi angora. He was the perfectly behaved ideal kit (bar for photos!) and was quickly stolen by 11 year old Ella (Suzanne’s daughter) for most of last year. Click here for more photos of Levi and to view his pedigree.

Lastly, we have Peanut from Legacy of Ferrets. We imported him from The Netherlands in 2016 to join our ferretry. He is a chocolate self angora and is our second largest boy. His chocolate colouring is so rich and it’s rather hard to capture it on camera. He has a beautiful nose, body structure and head shape. A very solid muscular boy. His nature can’t be faulted. He has never once even attempted to bite. He is the crazy dude. The one that can dance until the sun goes down, then dance some more. He isn’t the cuddly type as who has time for cuddles when all you do is dance. Click here for more photos of Peanut and to view his pedigree. 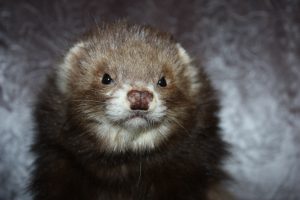